The last few weeks i have been working on a "new" solex, this one is an old 3800 i bought a few years ago and it has been stored up ever since. My idea with this one, was to strip it down, change the bolts,cables, bearings etc.
But othewise leave it in its rusty ( some call it patina hehe ) condition and clear the worst rust down with sandpaper,then give the whole bike some good wax ( bee-wax, in the eco-spirit) to keep it from deteriating completly.

So far, i have stripped it down, cleaned all the parts , assembled the frame back together, fixed the wheels, bought new whitewaal tires+tubes and mounted them, changed all the cables, changed the crankshaft, drivechain, bearings, wiring for the rearlight, renewing the brakes front and back.

As a little supplement, theres a very old bike-lock mounted on the frame, this i took of and restored it with new springs, cleaned all the innerparts for rust and dirt, BANG ! it worked again, so this is definently getting back on the restored version

Now all thats left is mounting the 3800 motor, which is bought from "Steen", who had one fully restored for sale.
aaaaaaand connecting the cables and wiring... so i can drive into the sunset on my rat-looker solex bike

a little before picture from 2007:

and pictures of the last days progress:

And some from the bike-lock assembly:

theres more to come when the motor arrives with mailman... hopefully soon 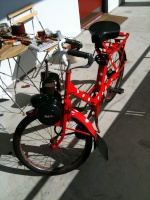 Hi all
Thx for the nice words, i just wanted to give you all a little update from the project.
I recently recived the Motor from "steen" , it was beautiful and i just couldent wait to get i mounted on the frame. It sat almost perfectly the first time, only a small adjustment on the new exhaust was needed.

Now it was time for the test drive, it took 20 meters of pedaling and then it started without any problems, i took the moped for a small spin around the block and i was thrilled, Steen had done a very good job, i almost feelt it ran a bit to fast ( yes, no sh*T

) . Note: i am used to drive with electronic ignition and i suspect i for having reduced rpm's a little on my other solex + i am 110kg heavy dude...

Anyway, i took the bike up for its last motor adjusments and mounted the exhaust, light, and a couple other things and made the final steps for now. My next idea for the bike would be a crashtube prefebly a rusty one and get an old solexine can and fit it on the front.

On day 2 i took the solex out for a 20km test drive and it ran great, no problems whatsoever ! ... But later that day i wanted to ride out for a grill party in the other end of town ( århus ) and suddenly the solex began acting a little strange.
It lost power and the motor needed more'n'more choker, then it died and i had to wait a few minutes to start it again. Then it ran like a charm for about 500m and then it all started again. I began the usual motor check when i got home and i found ... nothing ... everything was like it should be, spark, ignition, gaz and so on worked !... i tried to change the condenser and ignition coil , clean the carb. and fuel pump, then the motor started first time again and i took it for a new spin, noooo problems this time either !
Then later that day i took for a new ride to the beach, and it started acting funny again, just like the other time.
Then i noticed the gaz in the rubberhose loked a little like whipped cream and it kinda build up in the hose all the way up to the carburator's overflow.
Hmmmmm very strange, i wrote a note to Steen when i got home, crying like a little baby and telling him about my engine troubles hehe, but he was eager to help as always and he saved my motor-ass yet again ! ...
He told me to check all the usual things and he offered me a full refund if i wanted ( and that was something he didnt have to ) But he's a trooper when it comes to help with solex, so i decied to keep the engine, because i was sure that it was a small problem that Steen couldent have known anything about.
Steen also informed me, that he once had heard about a man with a similar problem, which was caused by heat from the exhaust, the heat "Cooked" the gas from the fuel pump because the small pipe from pump to carb simply was fitted to close to the exhaust.

I came to think that, my problems had only been on two very hot days in dk (25-30 C ) aaaaaaand i noticed the fuel pipe was close to the exhaust-pipe. So i bended it so far away from the exhaust as possible and fitted a 22mm flex metal tube around the exhaust pipe in the motor area to insulate som of the heat from the exhaust.Then i waited til it got dark and the temprature feel, took solex for a spin up and down the hills of aarhus, and it drove like it was paid for it. No problems at all and there havent been since ! ...
So conclusion must be the engine overheated , caused by the warm weather and a fuel pipe to close to the exhaust... And the problem was something Steen most definitely couldnt have foreseen or caused

I can only recommend Steen's motors to others, they are in very good condition and he is very helpfull.

Very nice, all too many solexes are renovated to death and look just boring.
It is always very difficult to keep your hands of a total renewal, i´m glad you succeded!
B